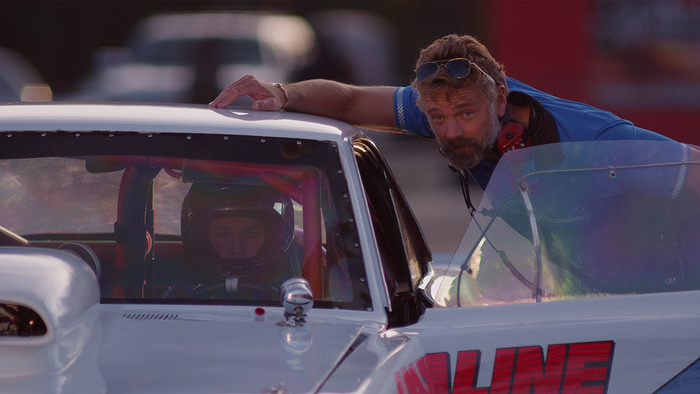 Wilmington, NC (July 15, 2013) Award-Winning film company, Living Water Films, has launched a campaign via Kickstarter in an effort to raise $45,000.00 to fund the completion of their latest movie project,Adrenaline.  Kickstarter is a popular crowd-funding platform for creative projects. Living Water Films has completed 65% of the film and now needs raise the funds required to finish the film that they believe has an important theme and message, HOPE.

“We’ve teamed up with several non-profit organizations to help bring awareness to the tragedy of illegal street racing”, says Michael Rosander, the actor who plays Joseph Jenkins in the movie. He continues, “Adrenaline is not only about the rush of racing, it’s about capturing those moments in life where change can happen.”

Michael’s character, Joseph Jenkins, is an orphaned street racer who struggles to make his way to the top in the dangerous world of high-stakes illegal street racing. Joined by his best friend, Trace Mallery(Myke Holmes), they crank out all-nighters working on the car for that next race. Joseph’s life is suddenly turned upside down after a near fatal car crash. During Joseph’s recovery in the hospital, he meets Elijah Benjamin Salisbury (Gregory Allen Williams), who is living on borrowed time. Eli quickly gains Joseph’s trust with his ecstatic, frenzied way, toward life. Eli’s unbreakable faith encourages Joseph which leads him out of a wheel chair and into learning a new way to walk.

With the help of his physical therapist, Josie Rigsby (Charlene Amoia) , Joseph learns how to adjust to his new circumstances. As Joseph works closely with Josie, he begins to struggle with his heartfelt feelings toward the one girl who will change his life and (help him deal with) the physical limitations he has to learn to overcome. When Joseph finally returns home from the hospital, he is visited by an old racing friend of his father’s, Paul Sharpe (John Schneider). Paul convinces Joseph that he can not only race again, but that he is going to mentor him. Paul, joined by Trace, leads Joseph on a new journey into the professional world of drag racing.

Joseph now has to face the struggles of coordinating his physical disabilities against the high speed reaction time required to compete in the sport of drag racing. Facing incredible adversity, Joseph soon discovers that “it’s not about what you drive, but what drives you”.

This fundraising campaign is only possible if at least $45,000.00 is pledged by Thursday, August 15th, 7:30 P.M. EST. Pledges result in rewards such as a digital download, a DVD or Blu-Ray of the movie, and screening party tickets. Higher-end pledges result in rewards that include associate producer credits, co-producer credits, and even executive producer credits on screen and IMDB. You can visitAdrenaline, The Movie’s Kickstarter page and pledge today by going tohttp://kck.st/1aFN36i orhttp://www.kickstarter.com/projects/854387276/adrenaline-the-movie.

About Adrenaline, the Movie:

A drag racer’s life is turned upside down after a near fatal car crash, leaving him semi-paraplegic. Forced to face his new circumstance, he struggles to walk, to trust, to love, and ultimately, race again. The film features actor John Schneider (Dukes of Hazzard, Smallville), Gregory Alan Williams (Remember the Titans, TV series Necessary Roughness), and Charlene Amoia (How I Met Your Mother).

The vision of Living Water Films is to produce “edgy” films that provide spiritual nourishment and healing for the nations. – Ezekiel 47:12

Living Water Films believes in producing “much fruit” to glorify God and bring people into a closer relationship with Him. – John 15:8

What is an “edgy” film? An edgy film is when the filmmaker is willing to walk on the edge and extend his hand out to help any person who has fallen into the pit. – Luke 5:27-32

The desire of Living Water Films is to produce high quality films that also reach beyond the walls of the church;
A survey by the International Bible Society indicated that 83% of all Christians make their commitment to Jesus between the ages of 4 and 14, that is, when they are children or early youth. The Barna Research Group surveys demonstrate that American children ages 5 to 13 have a 32% probability of accepting Christ, but youth or teens aged 14 to 18 have only a 4% probability of doing so. Adults age 19 and over have just a 6% probability of becoming Christians. Living Water Films has been called to target youth 14 and older with the desire of raising the percentages of those who might otherwise be lost, to convey the love of Jesus Christ as their Lord and Savior through media.

Joseph joined a National Touring Company where he studied with former Broadway director and actor, Bill Silverman from the famous Actors Studio. Joseph spent the next few years directing, producing, writing, and acting. During this time Joseph married and then decided to move his family to Wilmington, NC where he found his way into the special effects aspect of film making. Many of his credits include TV series The X-Files, TV series Dawson’s Creek, and The General’s Daughter, a movie starring John Travolta. Joseph later formed a film production company in 2007, Living Water Films which has produced several award-winning films and music videos. Joseph brings 20 years of experience to this film.

To learn more about Joseph Q. Simpkins, visit his IMDB credits at http://www.imdb.com/name/nm1673384/). Like Joseph on Facebook (http://www.facebook.com/joseph.q.simpkins).